The CASPER project has developed three alternative Gender Equality Certification/Award Schemes (GECAS) to be managed and supported by the European Commission, plus a fourth scenario where the EC would not take directly action, incentivising instead EU member states to set up their own gender equality certification/award systems. The GECAS scenarios are based upon an extensive mapping exercise as well as 10 co-creation workshops with stakeholders throughout Europe to identify the key prerequisites for effective award/certification system. This blog post introduces concept scenario 2 - Gender Equality Strategy for Researchers (GES4R) as a sister scheme to the Human Resources Strategy for Researchers (HRS4R)

This concept scenario builds on an already well-known European scheme (the HRS4R) and integrates it with a separate but connected GECAS devoted to gender equality. It would still be possible to apply to HRS4R without also applying for the GES4R, as this would represent a complementary scheme. The rationale of this scenario resides in its very practical nature, that acknowledges that many institutions throughout Europe are currently engaged with the HRS4R, and a connected scheme focused on gender-equality would be more attractive for many, in so far as some basic operational mechanisms remain the same. It was the opinion of most participants in interviews and co-creation activities that it would be very difficult to expand the HRS4R to include gender equality to a satisfying extent. Instead, creating a new scheme sharing some basic setup options with the HRS4R, which would make it easy to combine them, was considered a reasonable balance of change-oriented goals and practical ones. It could be an accessible choice for less experienced institutions and countries, and could also help to keep resistances and backlash at a manageable level.

On the other hand, the link with the HRS4R setup, while potentially increasing attractiveness and feasibility, may also limit the scope of change, and special efforts would be needed to avoid “Tick the boxes” exercises (that is, aiming for mostly formal, on-paper achievements).

This concept scenario covers all four mandatory GEP (Gender Equality Plan) building blocks requested to access funding under Horizon Europe, as well as all five recommended content areas (find them here: Gender Equality Plans as an Eligibility Criterion in Horizon Europe). However, its typical focus on Human Resources could make the area of the integration of gender dimension in research more difficult to practically implement.

This concept scenario shares some basic features of the HRS4R scheme, even though, differently from this, it would adopt an intersectional perspective. Besides, it shares with Scenario 3 the choice of an assessment process combining self-assessment and peer review, but other features are exclusive (with respect to the other two concept-scenarios). The following can be set out (for the full list of the features, see the reading materials sent along with the questionnaire): 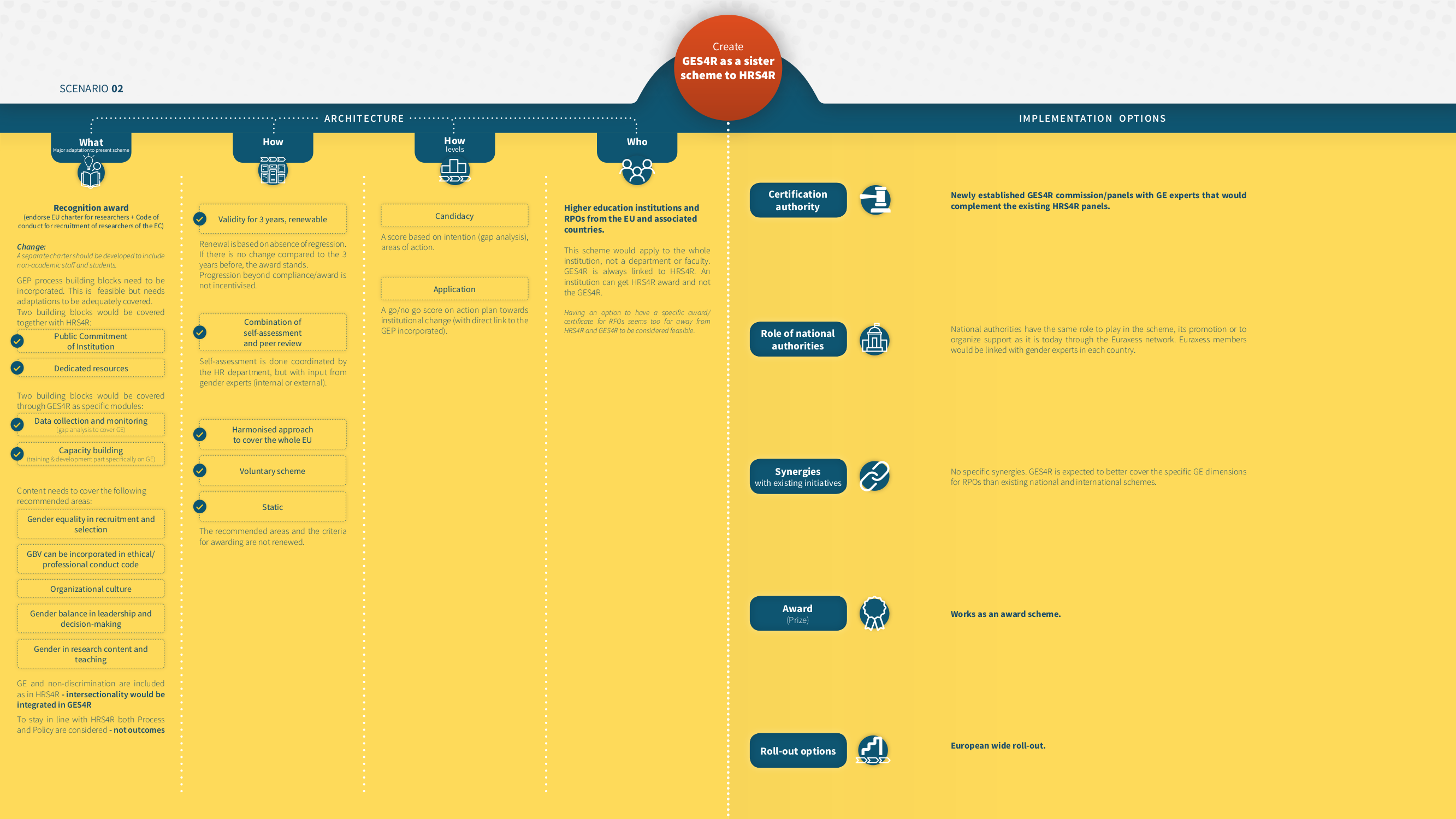