The CASPER project has developed three alternative Gender Equality Certification/Award Schemes (GECAS) to be managed and supported by the European Commission, plus a fourth scenario where the EC would not take directly action, incentivising instead EU member states to set up their own gender equality certification/award systems. The GECAS scenarios are based upon an extensive mapping exercise as well as 10 co-creation workshops with stakeholders throughout Europe to identify the key prerequisites for effective award/certification system. This blog post introduces concept scenario 3 - the Europeanisation of a national GECAS - Athena SWAN.

This concept scenario explores how the well-known Athena SWAN scheme could be adapted to become a Europe-wide scheme. The reason behind this proposal is that Athena SWAN represents one of the most advanced experiences at the international level, with high levels of participation and an extremely rich set of resources, tools, and materials, as well as a continuously growing capital of experience. Moreover, and because of its success, Athena SWAN is already in the process of internationalisation, with new countries adopting it. This concept scenario integrates both ambitious objectives and practical solutions, based on its extensive implementation.

On the other hand, participants in interviews and co-creation activities have also frequently highlighted – besides the many advantages – the risk that a scheme very specifically tailored on the characteristics and features of the Anglo-Saxon higher education and research system (which is also the area of its greatest expansion) might be more limited in terms feasibility, effectiveness and acceptability in different national contexts. In addition, its ambitious setup is likely to trigger resistances and backlash in specific national contexts, as well as make it less accessible for some countries in terms of resources (financial, human, expertise-related).

This concept scenario would cover, with minor adaptations, all the four mandatory GEP (Gender Equality Plan) building blocks requested to access funding under Horizon Europe, as well as all five recommended content areas (see Gender Equality Plans as an Eligibility Criterion in Horizon Europe). The area currently missing in Athena SWAN (the integration of the gender dimension in research and teaching content) would be integrated into the new European Athena SWAN.

Among the most significant features of this concept scenario (for the full list, please check the reading materials sent along with the questionnaire), its focus on both process and outcome in the implementation of Gender Equality Plans (GEPs) can be singled out, as well as its participatory approach to GEP design and implementation, with representation of all levels and categories of staff, the (recently introduced) adoption of the intersectional perspective, broadening the set of potential inequality grounds that are actively addressed, the possibility to apply at the level of the whole organisation and/or at Department/Faculty level. The assessment process is accomplished through self-assessment and external assessment, the latter from peer-review panels.

A set of features are unique to this concept scenario, as compared to the other two: 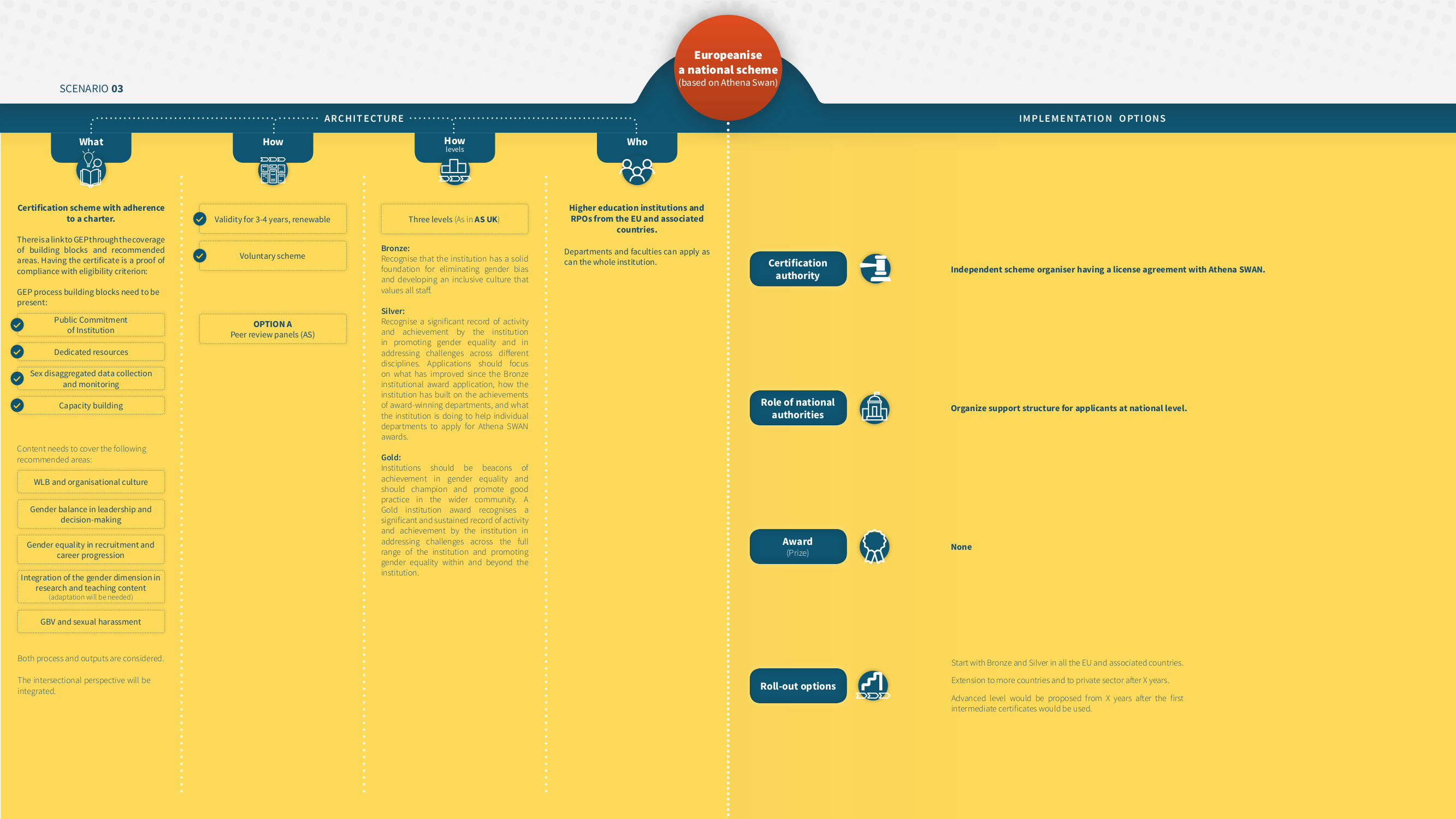